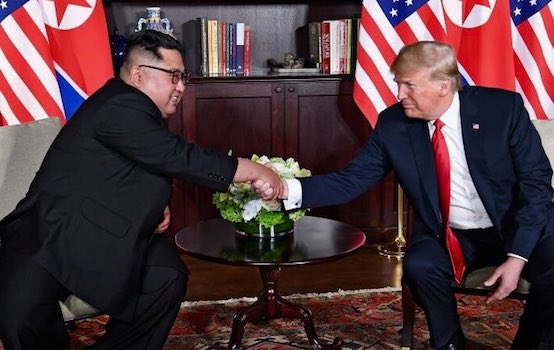 US relations with other countries, especially sovereign independent ones it doesn’t control, are long on unacceptable demands, woefully short on seeking cooperative relations.

They featured one-sided unacceptable US demands in return for empty promises — how Washington always deals with nations it wants transformed into vassal states.

According to John Bolton earlier,

“(w)e have very much in mind the Libya model from 2003, 2004. There are obviously differences. The Libyan program was much smaller, but that was basically the agreement that we made.”

In 2011, US-led aggression raped and destroyed the country, Gaddafi sodomized to death, a fate Kim understands, wanting a similar outcome for himself from future US aggression avoided.

On Friday in Osaka, Trump said he’d like to meet Kim at the DMZ, separating North and South Korea — “just to shake his hand and sell HELLO,” he tweeted, adding:

“After some very important meetings, including my meeting with President Xi of China, I will be leaving Japan for South Korea (to meet with President Moon).”

“While there, if Chairman Kim of North Korea sees this, I would meet him at the Border…”

Both leaders last met in Hanoi, Vietnam last February. Two Kim/Trump summits achieved virtually nothing toward stepping back from the brink on the Korean peninsula toward regional peace, stability, and normalized bilateral relations.

Treaties and Other Agreements US Consistently Breaches

North Korea maintains a nuclear and ballistic missile deterrent because of the genuine fear of possible US aggression.

Bilateral relations are dismal, pockmarked by multiple rounds of oppressive sanctions, showing extreme US hostility toward the country and its people.

Kim showed good faith during summit talks with Trump — in June 2018, again in February, accomplishing nothing, showing the futility of negotiating with a partner bent on dominating North Korea, unwilling to deal with its ruling authorities cooperatively.

Nothing suggests a change of US tactics ahead. Talks in Hanoi broke down because Trump regime officials refused to offer any concessions, nothing as a show of good faith, something not in the US imperial vocabulary.

Trump refused, insisting on full compliance with his regime’s unacceptable one-sided demands, refusing even a modest gesture of good faith in return.

“We have no intention to yield to the (one-sided) US demands in any form, nor are we willing to engage in negotiations of this kind,” adding:

Pompeo and Bolton “created the atmosphere of hostility and mistrust and, therefore, obstructed the constructive effort for negotiations between the supreme leaders of North Korea and the United States.”

“For what reason do we have to make this (65-hour) train trip again? Choe added: “I want to make it clear that the gangster-like stand of the US will eventually put the situation in danger.”

“We have neither the intention to compromise with the US in any form nor much less the desire or plan to conduct this kind of negotiation.”

On June 20 and 21, days before the Osaka G20 summit, China’s Xi Jinping visited Pyongyang, his first state visit as head of state following Kim’s invitation, part of efforts by both countries to work cooperatively.

Both leaders said they reached consensus on “important issues,” agreeing to further cooperative relations, especially given US hostility toward North Korea.

There’s virtually no prospect for normalizing US relations with the country.

An uneasy armistice has persisted between them since US aggression in the early 1950s ended.

It continued endlessly by other means from then to the present day. It won’t end as long as the DPRK defends its independence, its sovereign right.

It rejects the acceptable US demand to subordinate its sovereignty to its interests — as it should. The same goes for all nations.

Note: On Sunday, Trump and Kim met in the DMZ, DJT saying talks between both nations will begin “over the next two or three weeks.” He also stepped over the demilitarized zone border into North Korea, the first sitting US president to do it.

Talks are better than conflict even if there’s no prospect that the Trump regime will take steps toward normalizing bilateral relations.

This is a developing story, more on it as further information becomes available.

Note to readers: please click the share buttons below. Forward this article to your email lists. Crosspost on your blog site, internet forums. etc.

Award-winning author Stephen Lendman lives in Chicago. He can be reached at lendmanstephen@sbcglobal.net. He is a Research Associate of the Centre for Research on Globalization (CRG)

His new book as editor and contributor is titled “Flashpoint in Ukraine: US Drive for Hegemony Risks WW III.”