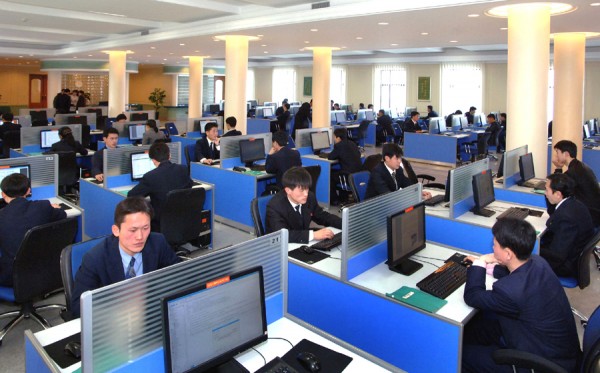 On September 19, 2001, Chairman Kim Jong Il inspected Kim Chaek University of Technology. Looking around the education and science exhibition hall and the sci-tech information reading room of the university the Chairman praised the teachers and researchers for their successes, and corrected the shortcomings of their educational and scientific work. Then he sat knee-to-knee with professors and doctors of the university to concretely teach them how to improve the qualifications of teachers remarkably.

That day he saw a relief map of the panorama of the university and learned in detail about the state of construction of its library. At that time, the frame of the library had been finished. Advising that the library should be built into an e-library he said that the design was not good as the architectural model of the library showed, and that the building should be large if it was to contain all necessary books. But if it was rearranged into an e-library, it did not need to be so large, he added and went on to say that it should be redesigned and built nicely by referring to e-libraries of other countries so that it could become the best e-library in Asia.

It was a global trend at that time to build an e-library to store and use information in keeping with the rapid development of science and technology and the explosive increase of the sci-tech information as good as “information flood” and “information crisis”. However, the construction of an e-library needs a huge sum of money, for it requires the establishment of information communication network and information service system. So, even developed countries arranged e-libraries by equipping the existing libraries with some information equipment. At the time every penny counted in Korea, and officials could not think of constructing an advanced e-library.

On January 4, 2006, he revisited the university and looked round the completed e-library. Soon afterwards he took measures to renovate the e-library in terms of technical equipment and operation, saying that however difficult the country’s situation was, it should be arranged well enough to have nothing wanted in the future.

The four-storey e-library has a total floor space of 16 535 square meters. Consisting of 15 e-reading rooms and 11 reading rooms it can share information with other institutions, including Kim Il Sung University, the Grand People’s Study House and the State Academy of Sciences, via the state network. And it makes it possible to have access to the global trend in sci-tech development and necessary data and knowledge through the Internet.