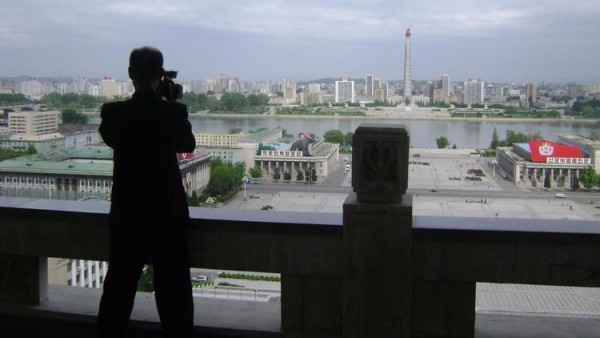 Starting next month, the Trump administration will prohibit Americans from traveling to North Korea. Closer to home, Ald. Edward Burke this week called for Chicago to sever business ties with the country. But at least one Chicagoan is making a case for traveling to countries like North Korea.

Matt Abbott, director of government and diplomatic programs at the Chicago Council on Global Affairs, visited North Korea in 2010, documenting what he saw in Pyongyang, Kaesong and Sariwon. He also visited other countries where North Koreans travel, speaking to many different natives of the country for his research on North Koreans abroad. His interest in the topic was sparked after he encountered North Koreans in an airport in Ethiopia.

“There’s so many average citizens who are just like us,” he said, “and share similar hopes and dreams for themselves and their families.”

Our conversation has been edited for length and clarity.

Q: Tell me a bit about what took you to North Korea.

A: From an early age, my parents instilled a passion for travel and learning about culture. My fascination with North Korea really began with a trip to South Korea, when I visited the Demilitarized Zone during a tourist trip.

Q: You visited three North Korean cities and the Demilitarized Zone in 2010. What did you see?

A: Every tourist has at least two minders or tour guides who travel with him or her. I had one gentlemen and one lady.

The most interesting part was just seeing individual North Koreans as individual human beings. Not every person there hates America. I was really surprised (about) one woman’s love of Britney Spears music. I had one person tell me she really wanted to travel to America. I found they were surprisingly open and frank with me. The fact that someone would admit to me that she would love to travel to the United States, that to me was such a shock, and it really put a human face on people who sometimes can be dehumanized here in the United States.

Q: Your minders translated for you. Was there any problem communicating?

A: I was pleasantly surprised to see how open they were. Every time we would meet someone on the street, they were open to interpreting for us. Especially in a city like Pyongyang, pretty much everyone who lives there is already vetted by the government. At the same time, we got both sides of the spectrum. I had asked another gentleman if he would ever come to America, and he said absolutely not. They were critical at times of the American government policy, but they seemed able to separate the American government from American citizens.

Q: Were the minders OK with your taking photos?

A: Throughout Pyongyang, we had no restrictions. On the drive to the Demilitarized Zone, there were times when they asked that we not take photos of the countryside. I think they’re quite sensitive as to how their country is perceived abroad, so any images of poverty or something that paints the country in a less-than-positive light is something they prefer not to be shown.

Q: The Trump administration recently announced it will ban Americans from traveling to North Korea, starting next month. What do you think about the ban?

A: I certainly understand the rationale behind it. Economically, it’s not going to make a significant dent in the North Korean economy.

I think it’s a huge missed opportunity for Americans to directly dispel stereotypes about ourselves, our country and to counter that propaganda.

Q: Otto Warmbier, a 22-year-old college student, died in June after returning from North Korea. He had been imprisoned since last year there after being accused of trying to steal a propaganda banner while visiting with a tour group. Do you feel this is something that could happen to any American? Did you feel safe there, and would you return?

A: It’s an absolute tragedy what happened to Otto. It shouldn’t have happened to him. It was certainly unjustified. At the same time, I certainly would go back.

I felt perfectly safe, but I will say the trip is not for everyone. But if one does one’s homework and adheres to the laws while he or she is there, I personally felt very safe being there. It’s not a country that people should be going to to check off a box or have a typical touristy vacation.

(But) the opportunity that North Koreans can see an ordinary American coming to their country that is a good person, that is a kindhearted person and shares some of the same hopes and dreams he or she shares, every time an encounter like that takes place it’s breaking down barriers between our two countries.